It’s never too soon to give your kids a sense of time gone by. When children are small and live life thinking that the world revolves around them, any chance you can give them to broaden their horizons and think about others is an opportunity worth taking!

New Zealand is a young country with a comparatively small amount of recorded history…however the history we have is pretty action-packed. In Northland recently, we had a fantastic day out in the Bay of Islands visiting Roberton Island. With sweeping sandy beaches, rocky lagoons, and jaw-dropping views, the island is Paradise in its own right, but with a full-on past. It was fun to try and explain it to our son!

As we sailed up to the island past Cook’s Cove, where the British explorer and seafarer Captain James Cook arrived in 1769, I tried to explain to my 2.5 year old that once upon a time, a long time ago, Maori people were living here when a big sailing ship arrived. An old ship, square rigged, with a crow’s nest at the top. (“Like a pirate ship, Mummy?”…’umm – yes, sort of.’)

Imagine if you had never, ever seen a sailing ship before, I said to Mr Wide-Eyed. Imagine if you were doing the gardening one morning and looked up across the grass and the beach and saw a huge sailing ship anchored in the bay. What would you think it was? “A monster.” 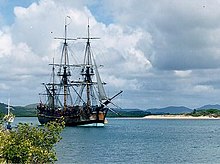 My son loves watching Maori TV. He prefers SpongeBob Squarepants in Maori. He likes to ask random people in the street if they are Maori. He is more likely to talk about the piwakawaka he saw that morning than call it a fantail. He is the whitest little thing you have ever seen 😉 but he totally got it when I tried to explain about strange English people from across the sea arriving at Maori-inhabited Ipipiri (the area we now know as the Bay of Islands). People wearing totally different clothes, speaking in a completely different language, in a huge ship with masts and sails…compare that to a Maori waka, I said to him. He sat there in silence, imagining. “Were they scared?” he asked. “Yes,” I answered. “But they were also pretty brave.”

I felt really proud of him as we hiked up to the highest point of the island and surveyed the vista in front of us…and when he is a little older I will take him back there and tell him the full story of what happened on Roberton (or Motuarohia) Island. It’s a little gory for a two year old…

Since then I’ve been thinking about all the opportunities I have ahead to get him thinking about what has happened in a place before he has been there. It’s a great way to encourage lateral thinking, a sense of empathy, curiosity, and of course foster a love of learning.

Have you visited any historic places recently? What did your kids think?

Join our community and receive outdoorsy inspiration in your inbox.

Awesome! Now check your email to confirm your subscription.

Why is the sea salty?

The Perfect Day – Snorkelling at the Poor Knights Islands

5 fun ways to liven up a weekend walk

Please go to the Instagram Feed settings page to create a feed.